Ice Cream … Any Time Is a Good Time!

Growing up in the Smith household, a celebration or special time of the year wasn’t required for ice cream. There was always a half of gallon in the freezer as the backup dessert or an addition to homemade brownies, as a meal was not complete without dessert according to my father. So as we celebrate National Ice Cream Month in July and National Ice Cream Day on the third Sunday (July 18th this year), I have fond memories of making ice cream with my father in our backyard under the trees, as well as visions of complex commercial ice cream making during a food processing class in my senior year at the University of Kentucky. Whether we enjoy ice cream year round or before breakfast (like a friend of mine), summer is the time to brush up on our ice cream knowledge and either breakout the ice cream freezer or stop by your favorite store to celebrate a most delightful day!

More Than a Frozen Treat 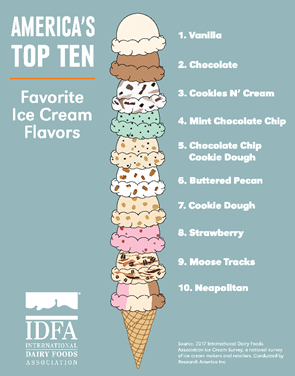 According to the International Dairy Foods Association, regular ice cream remains the most popular frozen treat in the United States with vanilla, chocolate, cookies n’ cream, mint chocolate chip and chocolate chip cookie dough ranking as the top five flavors. In fact, more than 22 pounds of ice cream and frozen treats are consumed annually by the average American.1 Overall, approximately 6.4 billion pounds of ice cream and frozen yogurt were produced in the United States based on 2019 data. Even though more ice cream is made March through July, perhaps not surprising (and the reason for the proclamation), July is the busiest production month for ice cream makers.1 Currently, the majority of ice cream and frozen dessert manufacturers have been in business for more than 50 years and many are still family owned.

What makes ice cream different than a product like gelato or sherbet? The answer lies in the fat content, texture and serving temperature.2

Ice cream, a mixture of milk, cream, sweetener and often egg yolks has a milk fat content ranging between 14 to 25% (the USDA requires that ice cream have at least 10% milkfat). Remember the creamier the product, the higher the fat content! If an ice cream is “grainy” and has more ice crystals, you can be assured, the fat content is lower (a lesson learned in that college food processing class). Also, the fluffy and creamy texture is a result of the churning process at high speed which adds air bubbles to the mixture. “Soft serve” mixtures have even more air bubbles. Even though we may think all frozen treats are served at the same temperature, that is not correct! Ice cream is served at the coldest temperature of most frozen desserts (between six and 10 degrees Fahrenheit), which affects the flavor. The colder the temperature, the less strong flavors come through on the tongue as the taste buds are numbed! Gelato, which originated in Italy, is similar to ice cream as it’s a mixture of milk, cream and sweetener. But it is made with less cream so the butterfat content is considerably lower at 4 to 9%. Even though the fat content is less than ice cream, the creamy and thick consistency of gelato is due to the product being churned slowly, allowing less air in the mixture. If you have enjoyed gelato, the richer flavor you remember is due to its higher serving temperature of between 10 to 22 degrees Fahrenheit. Sherbet is still a milk-based product but made mainly from a mixture of fruit purée (or fruit juice) sweetener with a small amount of milk or buttermilk. The product has a fat content of only one to two percent due to the small amount of dairy it contains. With less cream, the product is less rich but is creamier than sorbet. Sherbet, like gelato, is served between 10 to 22 degrees Fahrenheit for enhanced flavor.