Water: The “Juice of Life…and a Peach” 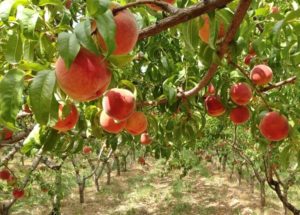 We’re in the middle of the summer harvest of fruits and vegetables all across the United States and one of the stars of the season is peaches! For those of us from the southern part of the U.S., we may argue that peaches from Georgia and surrounding states are the best. But, if you live or spend any time in Colorado, some would say you’ve never had a peach until you have eaten a “Palisade Peach.” Maybe it’s the appreciation of the Palisade Valley along with the taste that heightens the enjoyment of this fruit. As the Palisade Chamber of Commerce website states, “the climate, a 182-day growing season, and an average 78 percent of sunshine makes Palisade ‘The Peach Capital of Colorado’.” But it’s also, and most importantly, the availability of water.

Water Rights Are a Reality

For those of us in the eastern part of the United States, we have experienced floods and droughts but the chance of not having access to water only exists when limitations are placed on water usage for lawn irrigation in the direst times of no rain. However, having access to water becomes vital to our existence and the existence of agriculture especially in the western U.S. where drought conditions are the norm. Recently, during my Colorado reprieve from the Kentucky heat, I had the opportunity to return to the Palisade area (along the I-70 corridor near Grand Junction, Colorado) and visit one of the area’s many peach orchards. PeachFork Orchards is a second-generation vineyard and orchard  owned by Phil Patton (an Owensboro-area native) and his wife Susan. During our tour of the operations, the importance of water rights along the Colorado River became clear and why the Palisade area is sometimes described as the “land of Canaan” amongst the steep cliffs, or “palisades,” bordering the city.

Recognizing the importance of water distribution and use, Colorado was the first state to pass legislation on the issue. Those laws, dating back to 1879, still provide the foundation for today’s distribution system. Due to the foresight of previous generations, water canals from the Colorado River serve as the area’s primary source of water for agricultural irrigation as well as other uses. However, the availability of water is not taken lightly by orchard growers nor do they have free rein of use. Timing and quantity of water use is often coordinated by neighboring producers and is always checked by the regulatory body. Flood irrigation (trenches along the fruit trees) has been the typical type of irrigation. However, drip irrigation is now being installed within the vineyard trellis system (see photo at right), which reduces water use by 25 percent. Sophisticated engineering systems are in place at PeachFork to control water flow, sediment and timing. As Phil explained, it’s not only the water quantity that land owners are concerned about but also the right of using water on particular areas of the land. In some instances, the land is irrigated on one side of the canal but not the other.

When we look at the facts, the USDA Economic Research Services (ERS) states “agriculture is a major user of ground and surface water in the United States, accounting for approximately 80 percent of the Nation’s consumptive water use and over 90 percent in many Western States.” However, ERS states that, “efficient irrigation systems and water management practices can help maintain farm profitability in an era of increasingly limited and more costly water supplies.” Approximately, 75 percent of all irrigated farm land is in the 17 most western states, but overall, irrigated agricultural areas provide approximately half of the crop sales in the U.S. Vegetables and orchards account for 16 percent of irrigated land use while soybean and corn production account for 14 and 25 percent, respectively.

Whose Right Is It?

Food production is vital to our existence…and so is water. When we look at the use of water for agricultural production, often the discussion centers on best use with resulting lawsuits. For example, the Colorado River is the water source for seven states within the United States and two states in northern Mexico. Nearly 40 million Americans rely on the Colorado River system for their existence from drinking water to livelihoods ranging from farming to recreation.1 As neighborhoods develop on arid land, the competition for water use will continue. Drinking water for all is essential but so is food. As a whole, we are fortunate in the U.S. to have access to fresh water as more than two billion people around the word do not have access to fresh water.2 But how do we continue?

“Excessive use of water contributes to the global water stress” according to the UN Sustainable Development Goal 12, which calls for ensuring “sustainable consumption and production patterns.”3 But who is responsible for excessive use? Is it our personal consumption habits, commercial uses or agricultural production? Often times, agriculture is pitted against individuals’ desire for unrestricted use. Do we desire to have manicured lawns and golf courses or access to fresh fruits or vegetables? The reality is upon us to decide. It is important that each of us recognize water is not to be taken for granted regardless of our location and occupation. Water is the core of our own existence…and the juice of the peach running down our chin.